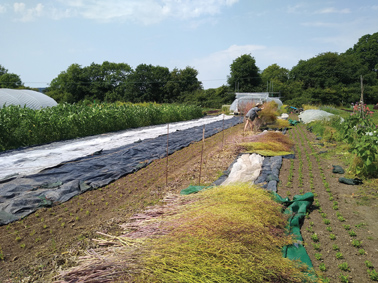 November is the moment to breathe as a market gardener. Finally all of the planting has finished (with the exception of just a few late plantings in the polytunnels such as broad beans, sugarsnap peas and spring onions), and outside all of the green manures have been sown and the garden can rest. We can take a step back and review the year, trying to get our notes in some semblance of order so that we can make changes for the next season. It is a good time to start planning for next year, whilst the memories of this year are still fairly fresh in our minds. We make slight tweaks to sowing dates to ensure that we have continuity to the harvests.
It is also a time of year that we can process some of the seed that we have harvested through the summer and early autumn. We grow a range of seed not just for ourselves but for sale to a couple of great seed companies like Real Seeds in Wales and Vital Seeds in Devon. Some of these are biennial crops, meaning that we grow the vegetable such as parsnips, chard or turnips as we would grow them to sell, usually sowing them around early august time. We then grow them through the winter (or harvest them at the end of autumn to store them away from rodents). The healthiest and strongest plants are then selected to replant them in late winter/early spring at wider spacings to allow plenty of space for the plant to flower and form seed, with good airflow between the plants so that the seed dries well.
For some crops we have to consider whether or not it is an outbreeder, meaning that it requires other plants to cross with to produce viable seed. If so, we need to make sure that we have a large enough population of plants to maintain genetic diversity. This varies from crop to crop, and some plants are actually self incompatible (for example brassicas—including kale, broccoli etc), which means that the stigma recognises if the pollen comes from flowers on the same plant or from one on another plant. If it comes from a flower on the same plant it will reject it and not be pollinated. This is a way that the plant can ensure that it crosses with other plants and maintains genetic diversity in future generations, meaning that it is more resilient to change, pests and diseases. Some crops will cross with others in the same species, for example chard will cross with beetroot if they are flowering at the same time in the same area, whilst others like lettuce do not tend to cross—so you can grow a few different varieties of lettuce close to each other and if you save seed from them they will come true, meaning that they will grow out with the same traits as the parent plant.
So, there is lots to think about and it is best to start out seed saving with some of the simple crops that are inbreeders (do not cross with others) and that you can save from just one plant if you wish. Examples of these easy crops are lettuce, tomatoes, peas and French beans.
Once we have harvested the seed from a crop we leave it to dry further on sheets in the polytunnel. After a couple of weeks the seed is usually ready to thresh, and the process is different for different crops, but generally we lightly hit the seed off the stalks so that it falls to the bottom of the pile. We then remove the stems of the plants and are left with seed and a bit of chaff (bits of the plant and seed pod). The next step is sieving this to try to remove some of the chaff, and then winnowing will remove the lighter bits from the seed, leaving you with a clean batch of seed that you can further dry before putting into airtight containers to store. There is not much better as a grower than to produce your own seed and sow it in future years, and by repeating this process over a few seasons and selecting the healthiest plant to save from, the plants will be adapting to the specific conditions in your garden – the soil type and local climate.

OTHER IMPORTANT TASKS THIS MONTH: If the weather dries, continue preparing beds for the winter if you need to plant them early in the spring (either mulch with compost, cover with straw or cover with black plastic). Don’t be tempted to tidy up too much, as old crops and flowers act as a habitat for many beneficial insects. Start going through your winter job list – whether it’s cleaning glasshouses or polytunnels, tidying up your propagating area, cleaning and oiling your tools or even looking through seed catalogues for a bit of inspiration for next year!