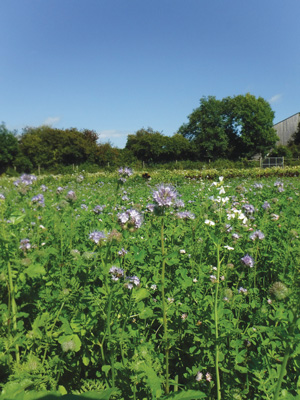 April was a particularly cold month this year, but we tend to go by the time of year rather than the weather as to when to sow crops, so we continued with our plans and everything was planted out under fleece, which helps to keep the cold at bay, but as importantly kept the cold, drying winds off new plants. The weather during April has been perfect for us on our slow to drain soil. It has meant that we can get lots of beds prepared for planting as it has been dry enough to cultivate.
In the past we have used a lot of mulch on beds but are veering away from this now. We have always bought in a lot of municipal compost and used it as a surface mulch, which helps to retain some moisture in the soil below, makes hoeing a little easier on our soil that can bake solid in the summer, and helps to suppress the weeds a little too. However, we are not totally comfortable relying on lots of inputs into the market garden, especially when we don’t know where they are from.
Although it feels great to have newly mulched beds and feels like the right thing to do in terms of adding lots of organic matter to the soil, there are potential downsides to it in terms of over-feeding the soil. Leaching can occur, leading to problems with surrounding waterways, and plants can grow too lush and be more susceptible to pest and disease damage. So, we are now applying compost more methodically to certain crops that require a little more—such as brassicas, and we will be sowing lots of green manures throughout the year to add organic matter and help to protect the soil and improve soil structure.
As with lots of ideas in gardening and veg growing there are many different ways of preparing the soil, and for us it is important to always be questioning what we are doing rather than “just doing it because we always have done”. For us, this is at the heart of true organic growing—always pushing ourselves to think how we could grow veg in a more sustainable way—without relying on so many external inputs and trying to build a thriving ecosystem where natural systems can be integrated into the veg growing systems.
One example of this is that we are putting more flower strips into the garden this year. Although this may take up a small amount of valuable veg growing space, it will provide vital food for insects, as well as birds which will help to pollinate our crops and predate some of the insects that eat our crops. It also creates a beautiful space to work in. We will be sowing all sorts of flowers—mainly annuals with lots of pollen, but also lots of umbellifers such as dill which attracts huge numbers of parasitic wasps and hoverflies that in turn eat aphids. We will sow lots of sunflowers, some of which we can pick to bring in the house, but lots of which will be left to seed and provide food for birds through the autumn and winter.
It is easy on a small scale to get carried away with trying to squeeze as much produce out of the space as possible, however, incorporating flower strips in to the growing space will pay back with the benefits that it provides.

WHAT TO SOW THIS MONTH: kale, forced chicory, carrots, beetroot, chard, successions of lettuce and other salad leaves (not mustards and rocket—these will bolt too quickly now and get flea beetle), autumn cabbage, broccoli, parsnips (direct sown), successions of basil, dill and coriander, early chicory—palla rossa and treviso types, cucumbers (for second succession), french and runner beans, courgettes, squash and sweetcorn if not already sown.

OTHER IMPORTANT TASKS THIS MONTH: Keep on top of the seed sowing, but don’t sow too much of anything—think about sowing successionally. Keep on top of hoeing and weeding—ideally hoe when the weeds are just starting to come up on a dry, sunny, breezy day. We usually hoe about one week after we have planted, and then usually another hoe a week after and after that the crop canopy hopefully shades out any subsequent weeds.
For more information about our veg bag delivery scheme go to trillfarmgarden.co.uk/boxscheme.html and for information on courses coming up this month go to trillfarmgarden.co.uk/courses.html