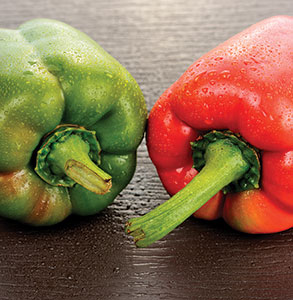 A well ripened pepper is a colourful and tasty treat.  They are an enjoyable challenge, and all about heat, heat and more heat, so best grown indoors.

Peppers are related to the tomato and have similar growing needs.  Sweet and chilli peppers look the same and have all the same requirements, and often get confused in garden centres, so take care at point of purchase. One chilli plant is generally enough for a large family, as one plant has many little fruit compared to the fewer but larger fruits of the sweet pepper.  For storage chillies must be fully ripe when picked, and left loose to dry before putting in a paper bag.  One miniature chilli plant grown in a pot kept in the conservatory might be enough unless you are a ‘hot’ fiend.

Pepper plants need it consistently warm from beginning to end. They need this extreme heat even as seedlings, so you may do best to buy plants unless you have a large hot propagator heated to at least 200°C.  In last year’s cold spring my peppers were still tiny in late May, but they grew logarithmically in the June heatwave.  In May I also bought some plants which were much larger, and they ripened six weeks earlier than mine.

Giving each plant 20”x20” will get you a big and healthy plant that ultimately yields more and bigger peppers per square foot.

We generally sow ours in a propagator early March. When too high for this, they go on a heated soil cable in the greenhouse with a view to finally transplant in mid-Mayy.  They need 24” spacing to get a good number of fruits per plant, and to speed ripening of fruits.

Secure the plant with a stout cane and hold the branches to avoid collapse onto the soil and loss of all as the fruits swell and weigh the plant down.  Constantly water according to need: generously in a hot spell, sparsely in cooler tines to avoid waterlogging.  As always, plentiful compost or manure in the soil ensures plentiful water supply, as well as feed.

Green peppers are generally unripe fruits which are perfectly nice and crisp, although given a few more weeks they colour up, sweeten and ripen fully. As the autumn draws in the fruits will ripen more slowly. Fleece will help, but by November the whole plant may give up and so you will be best to pick them green. There ae a huge number of varieties out there, all claiming to crop heavily in the English climate and ripen early. For many years I have grown Gypsy, a thin red pepper which does ripen early. A warm year is what you really need.

And how does the man in the Moon cut his hair? He eclipse it.