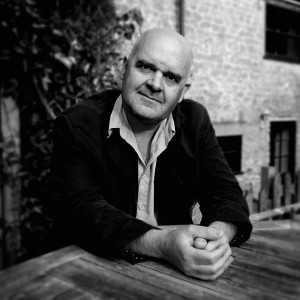 “Apparently the Chinese invented sweet and sour cooking for the English dockers because they liked their food really sweet and chicken tikka masala was invented when someone poured a can of tomato soup over some curried chicken. Billy Bragg’s song ‘England Half English’ talks about Englishness in terms of food; veggie curry fried up with bubble and squeak for breakfast or marmite soldiers washed down with a cappuccino. Englishness has always been a collision of cultures.

My grandfather ran a business in Shanghai and my Mum grew up there. They left when she was thirteen, on the last boat out as the Japanese started to drop bombs on the city. My Mum was a very good cook, she was Jewish and had very cosmopolitan tastes and I remember having avocado pears and halva as a kid and being introduced to lots of different foods. My Dad was a vegetarian and he dropped out and got involved in alternative culture and started managing bands. After my parents divorced Dad ended up moving to Scotland and living on an organic farm where he was trying to develop a self-sufficient community.

We lived in south London and I guess you could describe my parents as bohemian lefties but it definitely wasn’t poshville. All my mates lived on the local council estate. One of my best mates lived over the road in a council flat and when we started eating brown rice his Dad thought it was a subversive, revolutionary act that undermined decent working class food, so he banned brown rice from the house. If you come from a working class background now, you’ll be sick of being talked down to, being constantly patronised by the government, told what you should and shouldn’t be eating. It’s like it’s your civic duty to be healthy, so now if you want to rebel maybe you go out and have a burger.

My older brother’s a vegetarian. I’m not – I’d like to be but I just can’t manage it. So when I eat meat, I make sure it’s really good. I remember going up to stay with my Dad as a young teenager and fishing in the trout stream and he insisted that I had to kill and eat what I caught, “If you’re going to eat meat in this house then you’ll have to be prepared to kill it yourself.” So I learnt how to kill and pluck a chicken as well and I still have quite a moral attitude towards eating meat.

I started camping with Forest School Camps when I was four and by the age of 14 I could cook porridge for eighty people on an open fire. We did a camp at Magdalen Farm a few years ago and the camp chief brought along a little lamb. Everyone was going “aahh, isn’t it sweet” and he said, “It’s going to be dinner,” and the kids all freaked out. We didn’t actually kill that specific lamb, but we did spit roast a whole lamb, which took four or five hours and eventually even the vegetarians were salivating.

I left home at sixteen and moved up to Camden and joined a housing co-operative. Basically we’d move into houses that the council had taken off the housing list and do them up. We got to know the stallholders in Camden market and on a Friday night they’d sell us whole boxes of vegetables on the cheap. From those humble beginnings, living in squats and existing on rice and veg, one of my mates from those days ended up becoming vegetarian chef of the year and now has a vegetarian restaurant in Primrose Hill.

When I started going out on the road as a musician in the early 80’s the food was really grim and the only reliable meal you could have was an Indian. Then when I started touring Europe with my first band, it was the roadies in spite of all their greasy, leathery rock and roll-ness who got me into good food. These were guys who’d just come off the Motorhead tour but they knew all the best restaurants and they really knew how to eat well.

Probably one of the best meals I ever had was at a jazz festival in Sardinia. The promoter ran a restaurant on a vongole farm. There was a river running through the garden out to the sea and his son would jump in and collect the vongole and catch fresh fish. The promoter’s wife showed me the proper way to make tomato sauce and we spent three days hanging out at this restaurant playing and eating. It was brilliant.

Four days into my first trip to Senegal, I went and hung out at Baba Maal’s house, sitting around up on his roof and sharing a meal. Food there is a very communal process so the meal was just one huge plate of rice and fish and everyone uses their right hand to make rice balls and they pass the food to you in their hand. So the hygienically obsessed westerner thinks, “oh my god, what’s going on here?” Baba Maal came back to England and came round to my house for a Sunday roast – he loves roast chicken – and that’s when he really relaxed. Cooking and eating together is such a great leveller. When we’re working in the studio we always have amazing meals in the evenings. Everyone sits around the table, no matter who they are, to share a meal and chat.

In Senegal I got so fed up with being served by the wives who just scurry in, give you the food and scurry out again that I decided to make a meal for everyone and didn’t realise that I was breaking a whole series of taboos. The wives just sat round the table looking daggers at me while Baba Maal sat back with this sly grin watching me dig a hole for myself. When I brought out the food one of the alpha wives took a mouthful and just spat it out and the guys cracked up laughing. When I went round to their house the wives cooked an amazing, absolutely delicious meal and the look of pride on this alpha wife’s face said it all – “men can’t cook”.

When I was a kid we use to bunk off and sneak into the Odeon in Putney and I remember seeing the Ipcress File. There’s a scene in that film of Michael Caine making an omelette that was just so cool, because blokes didn’t cook and the way he broke the egg and the fact that he was from the east end and spoke in a London accent and wasn’t a toff, really got me into cooking. Up until then good food was something that posh people or hippies did but here was a working class spy cooking up an omelette to get the girl.

Before Working Week I was in a band called Weekend – named after the Goddard film and I was very into French philosophy – Jean Paul Sartre and all that. So we styled ourselves like hip, trendy, left-bank beatniks. Basically we were a bunch of pretentious students and I remember eating nouvelle cuisine for the first time in Paris and this ridiculous plate of nothing turning up. I still struggle with French food – it always makes me feel a bit sick.

I’d really like to go to Kerala and Goa. The best stall at Glastonbury was a Goan curry stall run by a family from Cornwall. The fish was fresh every day and they used to make this brilliant Cornish mackerel Goan fish curry. If we’re staying in an apartment when we’re on tour, Johnny Kalsi and I always go out on our day off to buy food and come back and cook it. He’s a really good chef and he’s shown me how to make a proper curry.

After the last tour we all came back here and had a curry war. Johnny Kalsi, who’s an Indian Sikh made a curry; I made a Thai curry; Andy Gangadeen, our drummer, who’s been on a Rick Stein fish course made a brilliant fish curry. There’s a restaurant called Lahore in Whitechapel that he goes to all the time so he taught them one of his recipes and now it’s on their menu. Everyone in the Imagined Village is a committed foodie and that’s what really makes a gig for us. We’ll go out of our way to have a good meal.

It’s very easy to put on weight in my line of business because you spend a huge amount of time just sitting around. You do a long-haul flight, sit around in the hotel, do the gig, get up a four in the morning and go to the airport for another flight. I really needed to sort myself out so I’m on the Atkins diet at the moment and I’ve completely stopped drinking beer. I’ve done five albums and two tours in the last three years, working under ridiculous pressure and the big pay back was going to the local pub and having a couple of pints of Palmers and I got overweight. I walk the dog on Lewesden Hill everyday and I was getting more and more out of breath and then I saw a photograph of myself in the paper and vanity kicked in. So I’ve lost a stone and I’ve got my energy level back.”