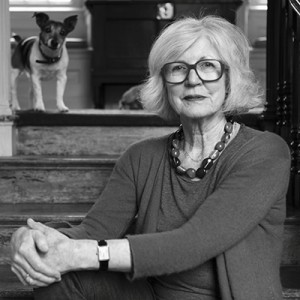 Fergus Byrne went to Bettiscombe, Dorset, to meet Caroline Conran. This is her story.

“My life began in a place called Digswell which used to be outside Welwyn Garden City in lovely countryside. It’s been more or less swallowed up by housing now. My father ran an Arts Club and put on plays and made scenery and all that sort of thing and we lived nearby in the countryside. He had wanted to be an artist but his younger brother and his mother were abandoned by his father and he had to look after them. So he got a job and became a very successful businessman running the Danish Bacon Company.

During the war, we three girls, me and my elder sisters and my mother, were sent off to America, because my parents were afraid of the bombing, although only one bomb fell near our house.

Baltimore wasn’t a great success for my mother, she didn’t enjoy it. So she came back with me and I can remember air raids and rationing and GIs in the park opposite our house and green oranges. But my sisters stayed in America and when they returned after three years away it was a bit of a shock because for a while I had been the one and only. When they came back that all changed. They had become quite Americanized and had lots of American little phrases and so on. They would say things like, ‘Why don’t you go and suck eggs?’—they thought I was a spoiled brat. They seemed much more grown-up than me.
Sally and I went to school at Knebworth House, which was later the venue for rock festivals. It was a grand house. I can remember being in the splendid gothic revival assembly room there and then all trooping off to swim in their swimming pool, which was boat-shaped, bright green and full of frogs. I think the place gave one a bit of an idea of what gardens should be because the garden had been done by Gertrude Jekyll. In fact, Edwin Lutyens had done quite a lot of work on Knebworth House—he was the son-in-law of Edward Bulwer-Lytton, the Viceroy of India.

But then we were packed off to boarding school. It was a very boring school in Suffolk which was about as far away as it could be from where we lived. In school, I decided that I was going to become a journalist but then changed my mind and decided I wanted to be an artist. So I went to art school in Cambridge and had rather a lovely time there. When that finished I decided I really wanted to go out to work so went to London to find a job. And actually it’s incredible how early we left home in those days. I left home and lived in really scruffy digs from the age of just 17. And I did struggle at times and was quite poor and lived on toast. I finally managed to get TB. I can remember the doctor being very unsympathetic and ticking me off saying, ‘You look scruffy and you’re not eating properly and that’s why you’re ill’. I was in hospital for six months. But I did become a journalist, starting with a job on House & Garden helping build room sets. We had an enormous studio on the top of Vogue House, first of all in Golden Square and then in Hanover Square. I would be running out and getting all the furniture together and helping put up the curtains on the fake windows and all that sort of thing.  Then I got a job on Queen Magazine and after a time became the home editor. I wrote about peoples’ houses, about lingerie, children’s clothes, and travel, but my favourite was food. So that really became my career.

The first love of my life came from Bridport and his mother lived in Shipton Gorge. We had this MGA which was a 1929 model with an open top and cost £20, and we decided to drive down from London to see her. And those hills just as you approach towards Bridport turned out to be a bit too much for this car, so I had to get out and push. When we got to his mother’s house she was very disapproving of me because my trousers were dirty. But she didn’t know I’d been pushing her son up this hill. It was very funny. Anyway, I kind of fell in love with the place then but it wasn’t until much later that I came to live here.
It was while I was at Queen Magazine that I met and married Terence Conran. He was a designer then and my sister was his PA. An ex-boyfriend of mine had been offered a flat in Terence’s house because he was working as a designer for him, and he explained to me that he was actually planning on leaving, so would I like to look at the flat. I had a look, and three weeks later I was going out with Terence and had moved in with him! He was 29 and I became his third wife. He already had two children and we went on to have three together. We were married for 30 years. During that time I helped him set up Habitat and then went back to writing. I freelanced as the Food Editor for The Sunday Times for about thirteen years, such great people worked there, some of them are still friends now and during that time wrote several food books, starting with Poor Cook in 1971. I also wrote The Conran Cookbook which sold over a million copies. I was astonished. It went into Swedish and Spanish and it went to Australia and it was in German and French—it just went everywhere. I did all the Self-Sufficiency Campaigns in The Sunday Times including the Real Bread Campaign. And I introduced, sadly, well not so sadly, the Nouvelle Cuisine to the UK. I translated books by French chefs such as Michel Guérard. I really enjoyed that. I used to have to go down to their Michelin starred restaurants and kitchens. I can remember going down to Eugenie-Les-Bains in S.W. France with my editor and we’d eaten exquisitely at Michel Guérard’s restaurant three days running. In the end, we had to escape to a little café in the village and order an omelette, which we thought was the most delicious thing we’d had.

In the end, Rupert Murdoch came along and ruined The Sunday Times and I left.
Around that time we were living in Kintbury in Berkshire. We had a big house on the river which was lovely. I’d been brought up in a house on the river so I’ve always had a thing about water. And then the children left and things didn’t go so well and we split up. I think I must have foreseen that things weren’t going to go so well because about seven years before we parted I sold some Habitat shares. It was really booming quite well in those days, and I wanted to buy a farm and a friend told me about Bettiscombe and I came to see it on the day of the auction. Michael Pinney showed me round and I just fell in love with it instantly. I put in the winning bid. That was in 1986.

After I bought it I used to come every week. A friend of mine was here and we’d do it up very slowly because it was a bit of a wreck. It had dreadful dry rot, all the panelling was off and there was no heating or anything. No insulation in the roof. How they lived here I don’t know. The first winter in Marshwood Vale I had 42 burst pipes because the roof and the building weren’t meeting. The east wind had blown in between. When my marriage split up I came straight here. And it’s been an absolutely wonderful place for me. So I’ve been very lucky.

I met Michael, my partner, who is a left-wing lawyer, 19 years ago and we’ve been together ever since. Between my children and step-children, I have 12 grandchildren. They don’t all come here at once very often, but my youngest son and his family have a cottage next door. So in the school holidays, they’re all running around here.

I have a book club in London which I enjoy and in the last two years I have taken up jazz piano. I used to paint a lot, but that, along with gardening which I also used to spend a lot of time doing, has slipped a bit lately, probably because my creativity is going into the piano. But my father was the same, he would have crazes and for two or three years he’d be translating sagas from ancient Norse and we’d all have to listen to them, and then he was writing poetry and then he was painting, and then he was doing something else. So I’m a bit like that.

I’m still writing and just now taking a pause after my last book which has just won the Andre Simon Award for the best cookbook of 2012. I feel very bereft if I haven’t got something to write.”