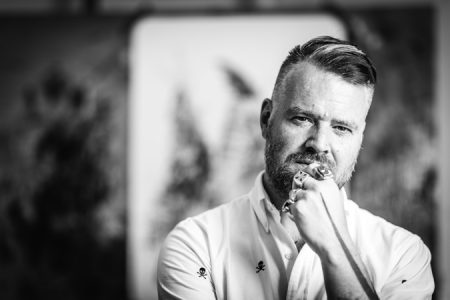 Painter Dave White is to select the artists for the Painting & Drawing category of the 2019 Marshwood Arts Awards. He talked to Fergus Byrne about some of the opportunities that helped him to become a successful artist.

It was only on the last day of his degree course at the Liverpool John Moores University that Dave White discovered whose workspace he had inhabited for the previous three years. As he packed up his paints and brushes, a cleaner explained that, thirty-odd years before, the space had been occupied by a mouthy young teddy boy called John Lennon. Big boots to fill—in some ways—but then Lennon had famously quit what was then Liverpool College of Art to go on to a different career.

Dave White, on the other hand, never really lifted his head from the canvas. He won an arts competition; was chosen to join the prestigious Northern Graduates exhibition at the Royal College of Art, and, following that, found himself exhibiting alongside David Hockney and Picasso at Sotheby’s. His rise was meteoric and mind-spinning. He worked hard and went on to be feted as “the new Andy Warhol”—a badge that at times has been as much a burden as an honour.

But these early breaks are part of the reason that Dave is so enthusiastic about Arts Awards. ‘It’s amazing how a little thing can spur you on’ he says. He remembers the evening he sat in a room with others who had been nominated as the best new talent in visual arts when the painter Adrian Henri announced his name as winner. ‘I nearly spilt my drink’ he laughs. ‘I was sitting next to Norman Wisdom. It was bizarre.’ But it gave him an early break. ‘And for some people, that’s exactly what you need. It gives people confidence and a wonderful opportunity for people to see what you do.’ He echoes the sentiment offered by many of those who have selected work for the biannual Marshwood Arts Awards in the past. ‘At the end of the day every artist is on a journey, and it’s nice to be acknowledged.’

For Dave White, that journey began as a child. ‘Ever since I was a little boy, I’ve always made images of things I was into’ he says. ‘Things I was obsessively into. It’s almost as if anything that captured my imagination, that floated my boat, I would go away and make an image of it.’ Even in school, all other classes were just treading water until it was time to paint and draw. Sitting in school, he just knew that ‘all the other lessons were not where you want to be’.

Although accepted for a place in Glasgow School of Art he had already come under the influence of well-known local painters such as Rodney Dickson, Dick Young and of course Adrian Henri. ‘These guys were much older than me, but they took me under their wing’ he recalls. Consequently, he couldn’t see a reason to go and study anywhere outside of Liverpool. His father was a butcher who had hoped his son might take over the family business, but not only had art derailed that ambition, Dave had also decided to become vegetarian. However, he credits his Dad with passing on his talent and imagination. ‘His window was his outlet and his creativity’ he says of his late father. Designing the layout of his shop window was something he took time and effort to get right. ‘He was also a jazz drummer, but he would go in at five in the morning to do his window. It was immaculate. He was the best in his trade.’

Taking that creativity to another level, Dave’s connection was with paint. As he puts it, ‘there were no ifs or buts’. When he discovered oil, he says, ‘It communicated viscerally my ideas. Oil paint can be a tricky beast for some people, but I never found that. I connected with it immediately.’ His feting as the new Andy Warhol came after a collaboration with Nike and Brand Jordan where he pioneered ‘sneaker art’. Always a huge fan of sneakers he understood what he called ‘trainer culture’ and produced a series of paintings inspired by pop art. Those paintings and the sneaker line were a huge success. After his collaboration with Nike and Jordan, he was commissioned by Coca Cola to produce a painting for Jay-Z’s new design for Cherry Coke. Consequently, the ‘Andy Warhol’ and ‘pop art’ labels were applied perhaps too liberally, and though he found that period of his career ‘an incredible journey’ he says it doesn’t define him.
About twelve years ago he began working on animal portraits again. Variously described as “vibrant and rich, engaging and bold” as well as “filled with expression, emotion and dynamism” this work captures a depth not seen in most animal imagery. It was born of a love of animals and a reaction to his shock at the many endangered species around us. He points out how we take for granted the fact that tigers, rhinos, elephants etc. are endangered. ‘But what people don’t think about are animals like chimpanzees, parrots or sea-lions.’

Some of his fondest childhood memories are visits to Chester Zoo, where the introduction to a three-dimensional perspective of animals still influences how he paints. ‘When you look at a rhinoceros, or you look at a giraffe’ he says, ‘your brain has got it imprinted that that’s what it looks like. But when you see them move…’ That movement and the layers of life within his subject are what he strives to get into his paintings. His focus is on getting a connection with his subject. He has what he admits is ‘an obsession’ with great apes and talks about the need to make eye contact. ‘Once you’ve got that eye-contact there’s something much more going on there.’

In 2014, following on from exhibitions depicting tigers, sea turtles, orangutans and various other animals, a show of work in London and Los Angeles focused on Great White sharks. His explosive use of paint highlighted their movement and dynamism, making the vast creatures as intimidating on canvas as they might be in the ocean. However, his goal was to show their fragility and beauty as well as their power.
Last year he created a hand-painted Rhino for the conservation charity Tusk. It was installed for a month outside Ralph Lauren in Bond Street and later auctioned to raise money for the charity. It was yet another turn on his journey, which to him felt somewhat surreal. He got to meet the charity’s royal patron HRH The Duke of Cambridge and hang out with Ronnie Wood, Gavin Turk and Harland Miller. ‘I felt a bit out of my weight grade, but it made a ton of money for the charity’ he says with an endearing humility.

He is looking forward to seeing the wide range of work that is submitted to the Marshwood Arts Awards this year. ‘The things I respond to most are instantaneous’ he says. ‘To be a good judge, you have to be quite eclectic. I would be looking for quality, individualism, a uniqueness and a spark—something that shows passion, integrity and honesty—people who enjoy what they do and love what they do. That’s what I respond to.’ Understanding the solitary nature of painting and the angst that many artists suffer he cites the later work of Picasso as an inspiration. ‘That freedom, that not caring and just making an image from your soul’ he says, is something he aspires to and profoundly affects his response to art.

There are many striking things about Dave White. His office is a shrine to Star Wars characters, video games, technology and sneakers. His look is a myriad of tattoos, chunky rings, deep brown eyes and infectious energy. And his canvases carry broad, confident, animated brush strokes illustrating his need to give life to what are instinctive reactions to the world around him. But the most striking thing is his enthusiasm for his craft and his wonder at what can be achieved. ‘My work’ he says, ‘if I really had to define it, is about that wonder of being a little boy and seeing something for the first time.’ He believes in his need to keep developing, keep refining and ‘never losing the love’ for his craft, but most of all ‘never not learning and never not pushing forward.’

Dave White will be selecting work for the Painting and Drawing category of the 2019 Marshwood Arts Awards.

For information or to enter work for consideration for the 2019 Marshwood Arts Awards visit www.marshwoodawards.com